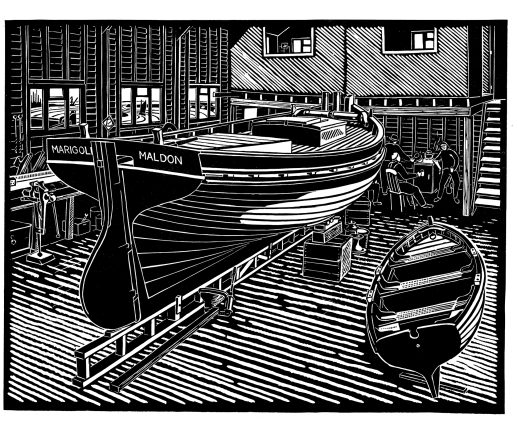 Around the Islands in Search of a Story

Pioneer at Sea
Originally built on the River Colne in 1864, the deep-sea smack Pioneer was once part of the largest dredging fleet around British shores. From the Rivers Colne and Blackwater in Essex, it sailed the seas around the British Isles and northern Europe for oysters and scallops. In 1998, Pioneer was carefully rescued from the mud in West Mersea, where she had lain for over fifty years. From there she was transported to Great Totham, where, over the next three years, she was totally restored. Several of the craftsmen who worked on her were the descendants of those who had built or sailed on her years before.

Pioneer In Frame
At his first visit to the Pioneer, Dodds was greeted by one of the shipwrights asking “d’you wanna job, Jamie?”.  He was very tempted as it would have been a very rare opportunity to work on the restoration of a wooden ship of this scale.  He involved himself by documenting the project with a series of linocuts. The joy for Dodds in working alongside the shipwrights was that it strengthened the connection between Dodds the shipwright and Dodds the artist.

Red Hook
This is printed onto a cream paper. The colour of the ink varies slightly with each print.

Twisted Shackle
This is printed onto a cream paper. The colour of the ink varies slightly with each print.

Winkle Brig or Bumkin
The winkle brig is an open clinker boat with a simple rig. It is a fishing boat, known as a bumkin in the Blackwater area. Dodds used it as an archetype in his book, ABC of Boat Bits, which he designed to introduce his children to sailing and the sea.

Steaming New Planks on the Scone
The Scone was having her port bow replanked down to the waterline while still afloat. in the background are the flour mills which the Thames Barges would have originally served.

Gladys
Dodds’ prints often reflect the shipwright work to which he has occasionally returned.  This print encapsulates a particularly cold winter’s work replanking the Thames barge Gladys on the River Blackwater at Haybridge Basin. 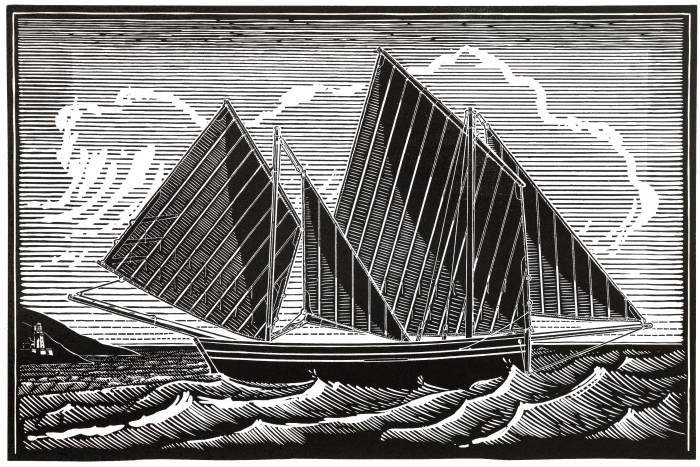