Maldon Shipwrights
Rigging a Thames barge, in preparation for the new season.

Flood Tide
Shipwright hurrying to spike a new elm plank below the waterline before the tide comes in.

Man with an Oar
It was a common saying in the boatyard that when people were fed up with boats “I’ll put an oar over my shoulder and walk inland until somebody asks me what it is.”

“Your wheel is new and your pumps are strange,
But otherwise I perceive no change,
And in less than a week, if she did not ground,
I’d sail this hooker the wide world round!”
Rudyard Kipling

Until Peter Grimes emerged during his final year at the Royal College, Dodds had turned his back on what he was later to acknowledge as a unique experience ~ his apprenticeship as a shipwright. He had lived in fear that the practical skills that he had acquired during those formative years would “drown his passion”. So it was not before he had spent some years out in the wide world as an artist ~ at a distance from the influence of both shipyard and art college ~ that he had the confidence to follow his feelings and allow himself to value and draw upon his understanding of the shipwright’s trade, and to put it to good purpose in his work. In his maturity he could review the course he had navigated through life so far and make the connection in his paintings. Although he had acquired all the skills required for sculpture, he chose the discipline of painting ~ for fear of upsetting the balance of skill and passion.

Over the following years he was driven to produce paintings with an acknowledging nod to Stanley Spencer (particularly his Shipbuilding on the Clyde series) that drew directly on his experience as a shipwright including Floodtide, Sail the Wide World Around and Rigger Aloft, New Flag. Some of these paintings were the basis of a delightful and very accomplished series of two-colour linocuts that positively celebrated his youthful memories of shipwrighting; full of incident, humour and authentic detail. The curved condensed compositions of the superb Maldon Shipwrights and Springtide perfectly echo the lines of a boat’s hull.

Often inspired by poetry, he later stumbled across The Shipwright’s Trade from Kipling’s Rewards and Fairies and at once recognised that the poem would be the perfect complement to his images and would be the ideal text for a new book. In 1990, The Shipwright’s Trade was Dodds’ second sensational show at Aldeburgh integrating paintings, linocuts and the book. A balance had been struck and part of his struggle was over. 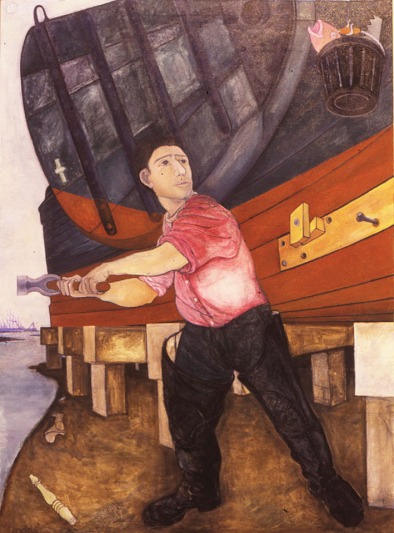